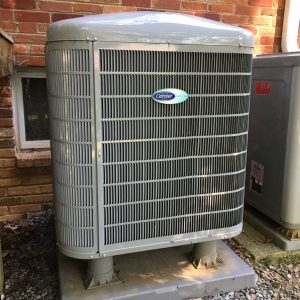 The noise didn’t bother the home inspector, but the air conditioning system was making far too much noise for a new home.

The problem here was too much air flow though an air return vent… and this took place in 2004.

You should always take a look at the HVAC system(s) when you are looking at any home you are considering buying. Make note of its age, brand, and condition.

If it is old, then I recommend negotiating in your real estate offer for a closing cost credit so you can upgrade the system after Settlement.

What to consider in new HVAC systems

Two years ago I needed to replace my heat pump system (it is a year-round air conditioner) and contacted three vendors around Vienna. Each came into my house and measured the square footage so they could determine the proper tonnage of the outside unit.

Size seems to matter. But not everyone had the same philosophy on the proper size.

I did not select the cheapest guy because, in my opinion, the unit I was replacing had been the cheapest and it did not last.

In the end, I selected a Carrier Infinity Series unit with a multi-speed air handler. It was a little larger too requiring the inside air return duct work in the attic to be enlarged to allow the ideal air flow through the system.

The results were noticeable to me instantly, and they were almost shocking.

First, the variable-speed air handler was incredibly quiet. In fact, it was so quiet that I went to the vent to feel if air was flowing.

And, to my amazement, the outflow was far greater than my old system.

But when I let the dog into the back yard, I had to walk over to the compressor to see if it was running. It was making about 10% of the noise of the old system. Everything was going strong but at a whisper compared to the old units.

Best of all, the built-in dehumidifying function keeps the unit working at a super low speed which is perfect for those extra humid Virginia summer days.

When a client called to say they needed a HVAC recommendation, I strongly suggested looking into a similar Carrier Infinity air conditioning system giving him the insight that I had recently learned.

“Doug, those guys were fantastic. We had no idea how loud that old AC system had been. In fact, it had been putting us all on edge whenever it started up… because we were all almost yelling to hold a conversation.”

Again, the quiet system literally changed their quality of life, and increased the value of their home.

And then, another new home home inspection

Recently when a home inspector was finishing up an inspection of a new million dollar, new home in Vienna, I asked him about the excessive noise from the air duct return vent. Again, it was far louder than I consider acceptable.

Although it wasn’t in the “scope of knowledge”, I asked him to note it in the report.

Upon review with the builder, the builder agreed to have the HVAC contractor come back to adjust the system which reduced the sound about 50%.

The inside air handler is as important as the outside unit

Some HVAC guys may tell you to keep the inside unit, but the new variable, multi-speed fans manage airflow much better and are much quieter.

Keep in mind, engineering specs are designed to match. And mismatched systems are far from efficient… just ask the engineer!