Before starting our family, my husband and I were avid recreational bikers.  We weren’t excellently skilled by any means, but we enjoyed taking our bikes out for long rides, enjoying scenic views and picnics along the way. 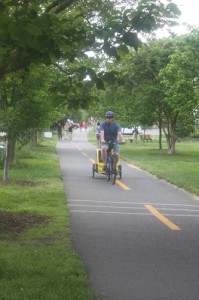 When I got pregnant, I hate to say it, this almost weekly activity pretty much ceased.

Something happened about a year ago, though… a family friend gave us a hand-me-down bike trailer, the kind that seats kids and pulls along behind your bike.  First, we were nervous new parents, only venturing on the safe sidewalks of our neighborhood.  Then, we realized our son was fine, totally safe, and he was actually begging for “more Daddy bike!”

We quickly sought out fun local bike routes that would be accessible with a trailer.

The Washington & Old Dominion Trail runs right through the center of Vienna.  It’s a long paved trail that stretches 45 miles from Shirlington to Purcellville.  With a little one in tow, we were not going the whole stretch!  Not a far drive from our house, though, the trail runs through Dunn Loring.

We parked the car, unloaded the bikes, and headed west for a mini adventure!

The great thing about this section of the trail is that it is relatively flat.  With a trailer in tow, that’s important, unless you are an awesome biker.  We are not awesome bikers, just enthusiastic bikers, with a trailer and a sometime cranky toddler in tow.  It’s roughly a three-mile ride into Vienna, though you could pick the trail up in multiple other locations and have a longer ride (again, I mention the sometime cranky toddler we had in tow).  The trail is mostly flanked with trees, making for nice shade on a sunny day and a tranquil ride.

We entered Vienna near the Community Center and decided to take a break.  My son was ecstatic to find baseball fields with real live little league games going on!  We sat on the bleachers and ate our packed snack, randomly cheering for both teams’ players.  If you’re not big on bleachers… don’t worry, there are picnic tables in the park, too!  Also, the Community Center and little league fields back up to Vienna Elementary School.  As long as you visit out of school hours, the beautiful playground is open for play!  There is a large play structure with multiple slides and monkey bars and swings for elementary aged children, as well as a separate tot lot play structure for preschool aged children. 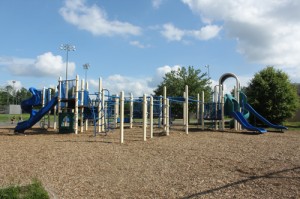 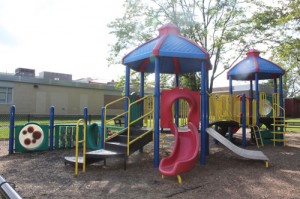 After our break, we hopped back on our bikes.  Though the trail crosses several small roads, the one major road crossing is here at Route 123.  Motorists are aware of the trail, but with small children, this crossing is the only one that makes me nervous, but only enough to exercise a little extra caution.  Across the road we found another small park, Vienna Town Green.

This park is less toddler-friendly, but worth a quick stop for the curious-minded.  The entrance boasts a pretty fountain dedicated to war veterans.  Behind that is an open grassy knoll descending upon a small amphitheater.  Beyond that we found the original town library building and the Freeman House, an old country store and exhibit area where you can learn more about historic Vienna.  I would also consider this for a good picnic area. The grassy area in front of the amphitheater would be fun to spread a blanket on, and there were a few picnic tables behind the Freeman House.

Mostly this park was of note for us on this bike ride due to its particularly clean public restrooms and drinking fountain. 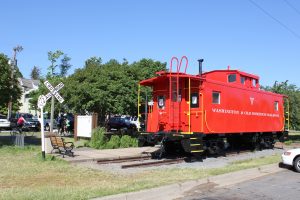 Just beyond the Town Green, across Maple Avenue, we found the old red Washington and Old Dominion Railroad caboose.  I knew about the caboose, but I hadn’t told my son about it because then all we would hear about the whole bike ride would be, “I want choo-choo!”  Needless to say, the second he laid eyes on it, he was in heaven!  The caboose is sometimes open to go inside, but when we arrived it was closed.  For a toddler, though, there is nothing better than climbing all over a real train car and steering its wheel.  There are even real tracks below it!  There were definitely some tears involved when it was time to go and say goodbye to the choo-choo.

Despite a tearful end to a fun journey, on the ride back to the car we listened to joyful choo-choo sounds coming from the trailer… and then silence.  One tuckered out toddler fell asleep on the ride back.

That is the most successful kind of day trip!

Emily Yosmanovich is an elementary school teacher on “vacation” to raise her young family in Northern Virginia, an area she's called "home" for most of her life. Meanwhile, she also pursues her love of writing by freelancing and blogging about all things “mommy,” which includes documenting her family's lively local adventures! Read more from Emily on her blog ~ twowaystreetblog.com .