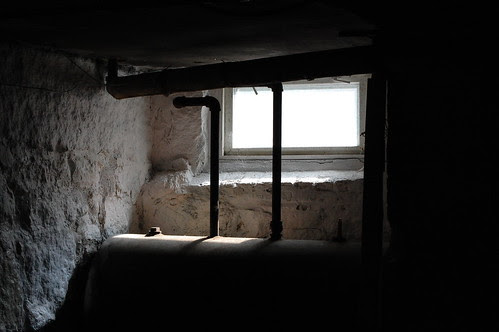 An old heating oil tank in the basement. Flickr Photo by MassMatt

Virginia is one of those states where home buyers bear the responsibility to investigate a property to their satisfaction before they buy it. You may have heard of caveat emptor before, which means let the buyer beware.

So, it is very important for you to know as much about the property as quickly as possible.

One line in the Northern Virginia Regional Sales Contract which is used by Realtors, discloses what type of heating fuel is used in the property. Natural Gas is the most common, followed by electricity, heating oil and propane. The specific type of fuel is marked off on the contract.

Heating oil was popular for many decades and is still delivered via tanker truck across Northern Virginia.

I have seen heating oil storage tanks in basements, in garages, in crawl spaces under a house, outside next to the house, and buried underground in the yard.

If the house you are considering uses heating oil, it is important for you to add a contingency allowing you to hire an environmental firm to evaluate the storage tank especially if it is buried underground. Older tanks are metal and after many years in direct contact with soil, rusting can occur and holes can develop.

Environmental firms can test the soil around the tank for evidence of oil. Pollard Environmental of Rockville, Maryland published that of the 5,000 underground storage tank inspections in Virginia, over 70% were found to be leaking.

Now, this isn’t the end of the world, but it is something to address with the seller prior to settlement. There are companies that dig up underground storage tanks everyday or properly seal them in place in accordance with guidelines from the state. But it needs to addressed before you become a Responsible Party.

Hiring a licensed environmental remediation company will cost money ($4.000 to $8,000) depending on the tank or tanks, the amount of contaminated soil that needs to be removed and replaced, plus the cost of a new tank. So it is essential that you negotiate that now to pay for the majority of the work.

It is also important to have some say into who will perform the work. When a leak is detected it is reported to the Virginia Department of Environmental Quality. There is a paper trail and it needs to be finalized by a licensed environmental contractor.

This is one of a handful of issues that I like to cover with clients because it shouldn’t necessarily be a deal breaker if it is addressed properly.