Earlier this summer, my family and I had the pleasure of taking in a performance by Rocknoceros during Viva Vienna on the Vienna Town Green.  My son, who is just a little over two years old, decided to be fiercely independent that day. 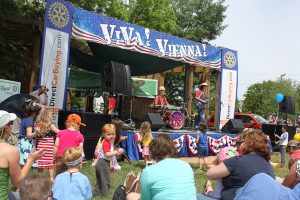 Rockin’ out with Rocknoceros at Viva Vienna!

Though we had found ourselves a nice patch of grass to settle on for the show, he was not in the mood for staying put.  As soon as the band came on stage, my son rapidly flung himself toward the front, pointing and yelling, “GUITAR!” with mounting volumes of joy.

My husband and I, of course, had that parental moment of…

a) out of our reach in a very crowded, public space, and

b) making a big scene in a very crowded, public space.”

Luckily, within seconds, we came to our senses and realized that the guitarist was smiling at him, the music was loud enough that no one really cared about his outburst, and the mosh pit of toddlers he had entered didn’t seem to be swallowing him whole.  My husband made his way to the side of the stage to be a little closer, just in case, you know, our son decided to try climbing on to the stage, which was the likely outcome of this situation.

Instead, our little Mr. Independent bounced and danced with his hands in the air, stared wistfully up at the musicians, and soaked in the melodies and the summer air.  [I’ll leave out the part when he grabbed the wires connected to an amp on stage… let’s just say Daddy has fast reflexes.]

But, where was I while all this happened?  I was still sitting on our happy patch of grass, just watching this all unfold before me (cut me some slack, I was 38 weeks pregnant, okay?).

As I sat there, though, I reflected on how awesome Rocknoceros is.  Rocknoceros is a locally grown, but nationally acclaimed, group of three guys who perform original children’s music.  They sing really silly, yet educational, music that grown-ups can actually stand to listen to over and over again without going insane.

As I was reflecting deeply on this topic (as deeply as one reflects on a 90-degree day, sitting on the grass, 38 weeks pregnant… which is to say, not so very deeply at all…), I conjured up a list of…

I started to smile and feel quite blessed that my children will grow up in an area so rich with the arts.  To name just a few artists we have seen in the area and would see again:

And that’s just what we’ve seen… there’s a bunch more, I know!  Most of these artists perform for free at public spaces around the area, like Tyson’s Corner Center, the Mosaic District, or Fairfax Corner.  Sometimes there is a minor fee when they play at certain venues.  As fond as I am of free entertainment for my child, I respect paying a fee sometimes.  The life of an artist is hard, my friends, and a few bucks to plant the seeds of art appreciation in a child is totally worth it!

One popular venue is right here in Vienna.  Jammin Java hosts a Tot Rock series, with kids’ shows several times a week during the day.  Maybe we’ll catch you there one day!

Emily Yosmanovich is an elementary school teacher on “vacation” to raise her young family in Northern Virginia, an area she's called "home" for most of her life. Meanwhile, she also pursues her love of writing by freelancing and blogging about all things “mommy,” which includes documenting her family's lively local adventures! Read more from Emily on her blog ~ twowaystreetblog.com . 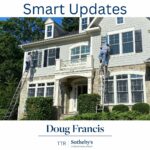