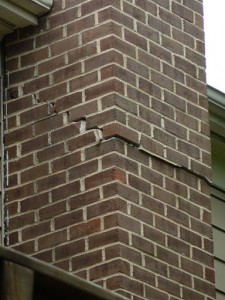 Lots of brickwork moved in Virginia during the earthquake of 2011

Two years ago I was sitting in my office when the whole building began to shake.

The ceiling panels were moving. The noise was getting louder.

Unsure, I stood in the doorway and then decided to get the heck outside!

That was August 23, 2011 around 1:45 in the afternoon, and the Washington D.C. region experienced a very strong 5.8 magnitude quake that lasted about 45 seconds. Maybe a small one for LA, but here in the land of brick, block and basements ~ it was historic.

That night my wife said she thought our house in Vienna was about to fall down. Well, it might have because it is a brick home built in 1957… and brick and block foundations don’t like lateral movement.

In another Vienna neighborhood, a client’s brick chimney cracked in half and the neighbor’s chimney toppled over. Yikes!

EPA estimates that about 20,000 lung cancer deaths each year in the U.S. are radon-related.

Today there is still structural damage that exists in homes in Fairfax and Loudoun Counties. When you are buying a home your home inspector can see much of the foundation, but not all of it.

But there is a hidden danger that any home may now have an issue with ~ and that is elevated Radon levels. And Radon can get into your home right through a solid floor.

Radon remediation is one of the easiest “problem issues” to fix in your house according to the EPA. The problem after the earthquake is that many foundations developed new cracks which allow radon to enter the house (although it can still get in without foundation cracks because it is such a small particle). Since Radon is tasteless and won’t give you an illness like nausea or headaches, you really can’t be aware unless you conduct a test.

Essentially you will need to test the air you actually breathe on the lowest level of your house.

Radon occurs naturally thanks to Uranium which is underground and constantly breaking down. Best yet, Fairfax County Virginia is categorized as Zone 1 for elevated radon levels.

So it is a known fact that Radon exists in Fairfax County, that it emits alpha particles which are extremely harmful when inhaled, and that there was a strong energy earthquake in 2011.

Even if your radon level was tested prior to 2011 and it was normal, it is extremely important that you have your home tested again. Buy a kit from Lowes, or hire a professional ~ this is important health information to know.

Here are some helpful resources:

Radon is a health issue for you ~ TEST

Okay, I know that I sound a little preachy here, but it is important that you know this information. If you have questions about who to call for a professional test then send me an email.

If we can prevent one case of lung cancer then this blog post served us well!